A great crowd attended the 1954 World Ploughing Contest ‘Cairn of Peace’ monument as it was unveiled in the centre of Killarney, Co Kerry at the weekend, for a very joyous and historic occasion.

Each year a ‘Cairn of Peace’ is erected in the location where the competition was run and it is was fantastic to see that 65 years later this tremendous monument was unveiled.  This was the first World Ploughing Contest to take place on European soil and the second ever World Ploughing Competition.

13 teams from all over the world competed over the 2 days in Killarney in 1954.  As the monument was unveiled flags representing each of these countries were raised as the Irish National Anthem was sung.

It was also a great privilege to have the 1954 winner from Northern Ireland Hugh Barr attend and representatives from the 1954 Republic of Ireland Ploughing team comprised of William Murphy and Ronald Sheane.

It is important to note that the NPA Managing Director Anna May McHugh & Anna Marie McHugh the World Ploughing Organization General Secretary, the local organising committee chaired by Tom Leslie all in Kerry Ploughing and Kerry County Council all worked tirelessly to ensure that this wonderful initiative came to fruition. 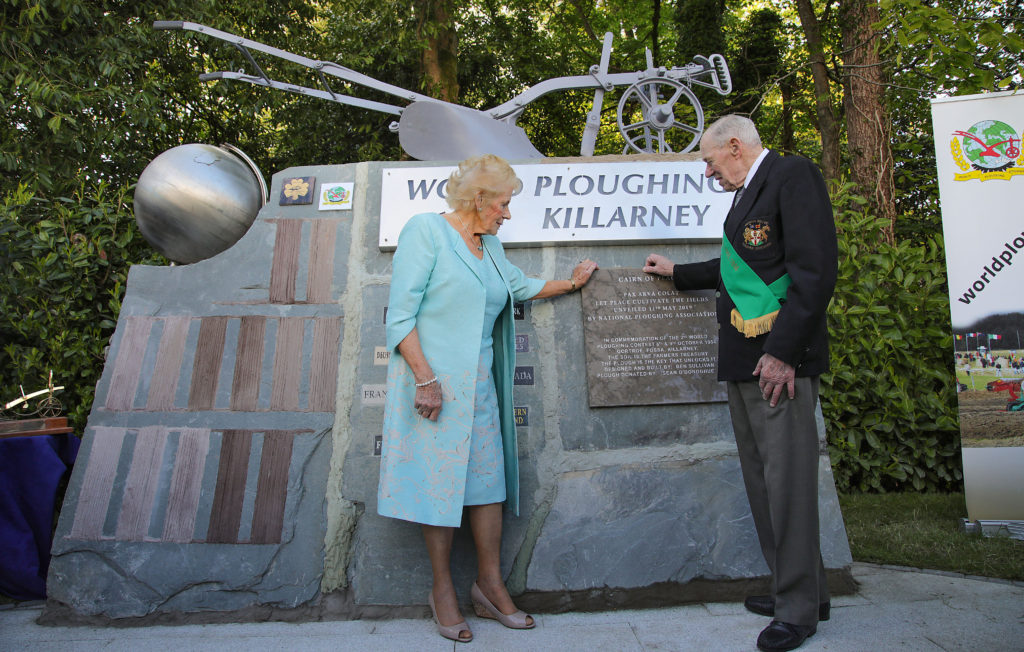 “Let peace cultivate the land” The Cairn of Peace Monument to commemorate the World Ploughing Championships held in Gortroe, Killarney in 1954, was unveiled by Mrs Anna May McHugh, Managing Director of National Ploughing Association (NPA) and Mr Hugh Barr, (aged 93) from Coleraine, Northern Ireland, who won the World Ploughing championships in Killarney that year. The Cairn of Peace, symbolizes the spirit of this competition, in keeping with tradition, a piece of stone from all the countries that participated in the world forms part of the cairn.Mrs McHugh, was secretary of the National Ploughing Association when the world championships were held in Killarney. The Cairn is located on Mission Road, Killarney. The plough was donated by local Farmer, Sean O’Donoghue, the Cairn was designed and built by Ben O’Sullivan, Ballyhar, and organised by South Kerry Ploughing Association and NPA.Photo:Valerie O’Sullivan/FREE PIC***/Issued 12/05/2019

Bernard O’Sullivan a Killarney local designed this magnificent work of art, which will stand the test of time and be admired by future generations who will be reminded of the importance of ‘Ploughing’ and the motto ‘Let Peace Cultivate the Land.’